This Sunday, 3 May, is Vocations or Good Shepherd Sunday, the dedicated annual day for Catholics around the world to offer special prayers to encourage vocations from families and parishes to the priesthood and to religious life.

In his message for Vocations Sunday Pope Francis says, “The first word of vocation, then, is gratitude. Taking the right course is not something we do on our own, nor does it depend solely on the road we choose to travel. How we find fulfilment in life is more than a decision we make as isolated individuals; above all else, it is a response to a call from on high. The Lord points out our destination on the opposite shore and he grants us the courage to board the boat. In calling us, he becomes our helmsman; he accompanies and guides us; he prevents us from running aground on the shoals of indecision and even enables us to walk on surging waters.”

For the full message and a range of resources, please visit: Vocations Sunday Resources 2020

Prayer to Discover Your Vocation

Almighty God,
You have made me to know you,
To love you, and to serve you,
And thereby to find and fulfil myself.
I know that you are in all things
And that every path can lead me to you,
But, of them all, there is one path especially
By which you want me to come to you.
Since I will do what you want of me,
I pray you; send your Holy Spirit to me;
Into my mind to show me what you want of me;
Into my heart to give me the determination to do it,
And to do it with all my love, with all my mind,
And with all my strength, right to the end.
Amen.

A Prayer for Seminarians

Father, thank You for the generosity of our seminarians.
Safeguard them as they prepare for the priesthood.
Keep all evil far from them, so they may become strong Christian men who are faithful to prayer, diligent in their studies, open to spiritual direction, and docile to all aspects of seminary formation.
Above all, enflame their hearts with love so they will be ardent and gentle shepherds for Your Church.
We make this prayer through the great High Priest, Jesus Christ our Lord.
Amen.
St. Charles Borromeo, patron of seminarians, pray for us.

A PRAYER FOR VOCATIONS TO THE PRIESTHOOD

Lord our God, you said that “the harvest is rich

but the laborers are Few.

Pray, therefore, the Lord of the harvest to send labourers into his fields.”

Lord, we pray for your Spirit to send us holy priests.

To ignite the spark inside men to faithfully minister as priests in the Archdiocese of Dublin.

Fill them with zeal to come forward   with a heart on fire with divine love,  so they may become mirrors of Christ, your Son, in a world in need of His light, meaning, hope and courage.

Send to the Archdiocese of Dublin, strong and courageous spiritual shepherds, fearless in proclaiming the Resurrection of Christ anew for our time.

May these men of prayer be always open to the responsible call of service to your beloved people.

We ask this through Christ Our Lord – AMEN.

‘The most important moment of my life” – Sixty years ago, 29 June 1951, Joseph Ratzinger was ordained a priest 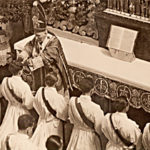 In his essential and limpid autobiographical account published in 1997 – the original German is entitled Aus meinem Leben: Erinnerungen 1927-1977 (Milestones: Memoirs 1927-1977) – Joseph Ratzinger remembers with vivid simplicity his ordination to the priesthood.  The great German Catholic Cardinal, Michael von Faulhaber (1869-1952), distinguished biblicist and patrologist, Archbishop of Munich and Freising from 1917, who during the dark years of the Third Reich had become one of the most courageous critics of Hitler’s regime, laid his hands on the 24-year old deacon in June 1951 and on his older brother Georg and 42 other young men.

“We were more than forty candidates, who, at the solemn call on that radiant summer day, which I remember as the high point of my life, responded “Adsum”, Here I am.  We should not be superstitious; but, at that moment when the elderly archbishop laid his hands on me, a little bird—perhaps a lark—flew up from the high altar in the cathedral and trilled a little joyful song.  And I could not but see in this a reassurance from on high, as if I heard the words “This is good, you are on the right way.”

There then followed four summer weeks that were like an unending feast.  On the day of our first Holy Mass, our parish church of Saint Oswald gleamed in all its splendor, and the joy that almost palpably filled the whole place drew everyone there into the most living mode of “active participation” in the sacred event, but this did not require any external busyness.  We were invited to bring the first blessing into people’s homes, and everywhere we were received even by total strangers with a warmth and affection I had not thought possible until that day.

In this way I learned firsthand how earnestly people wait for a priest, how much they long for the blessing that flows from the power of the sacrament.  The point was not my own or my brother’s person. What could we two young men represent all by ourselves to the many people we were now meeting?  In us they saw persons who had been touched by Christ’s mission and had been empowered to bring his nearness to men.  Precisely because we ourselves were not the point, a friendly human relationship could develop very quickly.”

A priest for sixty years, Joseph Ratzinger carries out daily, with humility and transparence, the work of making the one Lord of the world and of history present to women and men of our time.  For this, the Osservatore Romano offers Benedict XVI its best wishes, sure that its sentiments are echoed not only by those in the Catholic Church but by many others throughout the world.  And repeats for him the words of the ancient prayer for the Pope, invoking Christ’s protection and the only happiness that counts: Dominus conservet eum, vivificet eum, beatum faciat eum in terra et non tradat eum in animam inimicorum eius. 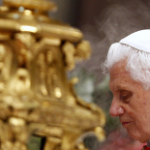 Pope Benedict XVI celebrated Mass marking the feast of Saints Peter and Paul, patron saints of the city of Rome.  During the Eucharistic celebration, the Pope also conferred the Pallium on 41 new Metropolitan archbishops, from countries all over the world, who have been appointed over the past year.

Attending the Mass in St Peter’s Basilica on Wednesday morning was a special delegation of three Orthodox leaders representing the Ecumenical Patriarch of Constantinople, Bartholomew I, part of a traditional exchange of ecumenical delegations which has helped to strengthen the bonds of friendship between the Churches of the East and West since shortly after the 2nd Vatican Council.

But the Mass also marked a personal moment of reflection for the Pope himself who was celebrating the 60th anniversary of his own ordination to the priesthood.

“Sixty years on from the day of my priestly ordination…

In his homily Pope Benedict said that sixty years on from his ordination, he can still hear the words that were addressed to the new young priests that day in 1951, the words of St John’s Gospel, ‘I no longer call you servants but friends.’  Words, the Pope added, that bring great inner joy and can also be seen as the entire programme of a priestly life.

“Friendship is not just about knowing someone, it is above all a communion of the will..

Reflecting on the meaning of that friendship with Christ, the Pope said it is above all learning to grow in ever greater conformity with His will, to know Him better through the Scriptures, through prayer, through the communion of Saints.  Jesus’ words on friendship, he said, should be seen in the context of His commission to His followers to go and make disciples of all nations – a command which challenges us to move beyond the boundaries of our own world and to bring the Gospel to all people.

After his intimate reflection on the meaning of his own priestly ministry, the Pope also greeted the Orthodox delegation present in the Basilica, as well as the new Metropolitan Archbishops who received the white, woollen Pallum, a symbol of service and a sign of a communion with St Peter and his successors.  Pope Benedict concluded with heartfelt words of thanks to the Lord for the past six decades of his own service to the Church, as well as thanks to all the people who, he said, have formed and accompanied me.

Why Not Take Some Time to Pray Using Our Icon

In silence gaze upon the face of Christ
He is calling you by name
He wants your happiness
Listen for his voice.

One thing I ask of the LORD,
this is what I seek:
that I may dwell in the house of the LORD
all the days of my life,
to gaze upon the beauty of the LORD
and to seek him in his temple.

(Allow these words to find a home in your heart)

In the silence of this moment ask the Lord to reveal to you the depths of his love and give us his peace.

A Prayer Initiative of the Vocations Office

One of Irelands leading Iconographers, Sr Aloysius McVeigh, a Mercy Sister, from Derry, has provided us with an appropriate icon as the focus of our prayer.

The icon depicts the face of Christ.  Its title is ‘Achieropoitos’ (image not made by hands), and is based on the shroud of Turin.  This image is very appropriate as it is Christ who is the one who calls us to our true vocation in life– the vocation of holiness.

The theme of the prayer endeavour is ‘Seek his face’.  This icon was blessed by his Holiness Pope Benedict in Rome over Easter and will travel around our diocese spending a week in parishes encouraging parish communities to pray for vocations.

Look to the LORD and his strength;
seek his face Always.

Allow these words to enter into your heart

The Calling of the First Disciples

As Jesus was walking beside the Sea of Galilee, he saw two brothers, Simon called Peter and his brother Andrew.  They were casting a net into the lake, for they were fishermen.  “Come, follow me,” Jesus said, “and I will make you fishers of men.”

At once they left their nets and followed him.

Where is the Lord Calling You?

Dear Lord,
You love me and you want me to be happy and at peace.
Reveal your face to me,
show me the path I must walk,
Give me wisdom to know where you are calling me and the courage I need today to answer that call
Help me to seek your face each and every day of my life so that my life can be spent in your service.
Through Christ our Lord.  Amen.